The largest ground-based optical telescope in the world is the 10.4-meter diameter Gran Telescopio Canarias (GTC) on La Palma in the Canary Islands. Karen Kwitter and colleagues (R. Corradi, Instituto de Astrofísica de Canarias, B. Balick, U. Washington, and R. Henry, U. Oklahoma) have been awarded time on the GTC in the fall of fall 2012 to observe two planetary nebulae in the Andromeda Galaxy, (M31). M31 is the nearest spiral galaxy to our own Milky Way,  2 million light years distant. Planetary nebulae are glowing gas shells expelled by dying sun-like stars; the details of the light they emit tells us about their chemical makeup and about how stars manufacture new elements during their lifetimes and release them into space to enrich the next generation of stars. These particular planetary nebulae are noteworthy for being located very far from the center of M31: they are more than seven times as far from the center of M31 as our solar system is from the center of our Milky Way Galaxy. The chemical composition of these nebulae will tell us about the processes and history that shaped the outer regions of M31, our sibling spiral galaxy. Learn more about Kwitter’s planetary nebula research here. 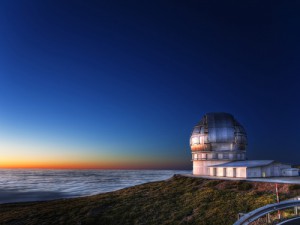 Please visit the Covid-19 website for the latest information, including details about vaccination, testing and mask requirements, and travel.